can only be attained through the Grace of a Sadhguru

Wavering of the mind, onslaught of doubts, frustration at the slightest sign of failure and hopelessness are all indications of discontentment and disturbance in life. Till a mind is restless there shall be a negative effect on the  body which shall result in failures and wastage of energy.

Just as a fist is formed by joining together of the five fingers, similarly all thoughts have to be concentrated in order to remove all restlessness from the mind’and fll it with supreme peace.

Diksha it means gaining the supreme peace that can be seen in Lord Vishnu and Lord Shiva and is a process of channelising all the energy in one direction that is present in each cell of the body. Just like a piece of iron that becomes magnetised on coming in contact with a magnet, similarly when the Guru touches a disciple while giving Diksha, the scattered energy in the latter’s body becomes channelised in one direction and thus, gains tremendous force.

The Guru wishes to make a disciple filled with peace just like Lord Shiva. Hence he takes the poison of discontentment out of the disciple and fills him with the elixir of supreme peace. 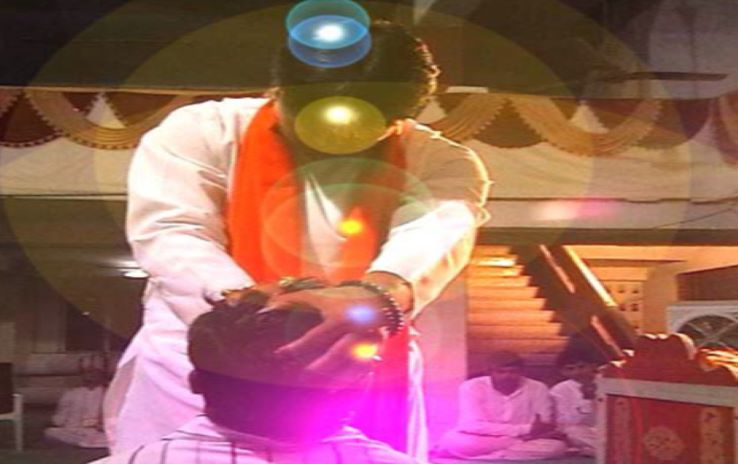 Guru gives Deeksha by touching the Agyachakra of the disciple through his thumb and transfers his Divine Energy and grace on him.

Guru imparts Shaktipaat Deeksha by just watching gracefully in the eyes of the disciple and through this glance, the divine energy of the Guru is transferred into his disciple

Guru bestows Bijakshara Mantra which is a special mantra to the Shishya according to various Sadhnas that would fulfill his wishes and lead him on the track of spiritual progress.

Guru gives Deeksha through thought (Sankalp Shakti) and amazingly this is the most powerful way of Deeksha. Here, through the divine energy of thought, Guru bestows his grace on the disciple which enhances his spiritual growth.

There are actually 32 subtle points on the spot known as the Third Eye on the forehead. 16 of these relate to spiritual accomplishments and 16 to material accomplishments. Very similarly there are 16 points of each in the Thumb of the Guru and by matching similar points in His thumb and on the forehead of the disciple Guru can activate all or some points and bestow specific benefits on the disciple by making some of His energy to flow into a specific point or points.

Only the Guru knows well which point has to be pressed in which way so as to help the disciple gain what he wishes to. This process is actually nothing but the Guru’s method of transmitting His divine energy through the Third Eye into specific centre’s on the Kundalini of the Sadhak. Every centre of the Kundalini has special powers and if even one capability is awakened it can prove enough to make a disciple uniquely successful in life.

Stay tuned about cause

Choose your favourite cause

WORKING TOGETHER IN UNITY.